A couple weeks ago I started a position for this portfolio in Coca-Cola (KO). I've owned them for many years but the pricing and valuation wasn't quite there. When the yield hit 3% I struck and made a purchase. They have recently released their Q3 earnings and it was a good time to review them. Here is an explanation of my process..

Description: The Coca-Cola Company, incorporated on September 5, 1919, is a beverage company. The Company owns or licenses and markets more than 500 nonalcoholic beverage brands, primarily sparkling beverages but also a variety of still beverages, such as waters, enhanced waters, juices and juice drinks, ready-to-drink teas and coffees, and energy and sports drinks. It owns and markets a range of nonalcoholic sparkling beverage brands, which includes Coca-Cola, Diet Coke, Fanta and Sprite. The Company’s segments include Eurasia and Africa, Europe, Latin America, North America, Pacific, Bottling Investments and Corporate.

Management doesn’t think share buybacks are value enhancing for long term investors. (Q3-2013)
I strongly disagree with that. The power of share buybacks compounds for a longer time then a dividend payment. I like it best when both are done. 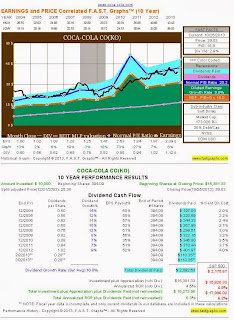 Fast graphs review
Its important to look at a company's historic price movements only to itself. Why? As we see here KO almost never gets below its fair value. Its Coca Cola it is too big of a name and to stellar a stock record. Instead of comparing share price to its fair value here I will use P/E as a measure of what is under and overpriced. We can see that right now its historically cheap and bottoming out. That bottoming is what I had been waiting over a year for. Is it THE bottom? Who knows. All I know is that it is historically cheaper then it usually is.

In 2010 we see a high spike in its EPS. This was due to a new multi-year bottling contract with Dr Pepper (DPS). They took the entire earnings at once instead of amortizing it over several years. For this reason, I ignore that spike in EPS and fair value.
The graph overall is exactly what I want to see: growing dividend and a growing EPS to pay for it.


Interesting to see that my calculations differing from Fastgraphs. They show it historically under its P/E range. Here its 20 P/E is above its 10 year average of 19.46 signaling that its overpriced. I would not say one is wrong they are looking at P/E differently. I used diluted earnings with fastgraphs.


Company and Industry specific commonly used acronyms and terms
Price Mix: The value or price of an item that is determined by the individual producer. i.e. MSRP.

Disclaimer: The investments and trades discussed are not recommendations for others. I am not a financial planner, financial advisor, accountant, or tax adviser. The financial actions I talk about are for my own portfolio and money and only suited for my own risk tolerance, strategy, and ideas. Copying another person's financial moves can lead to large losses. Each person needs to do their due diligence in researching and planning their own actions in the financial markets.
Posted by Pulling Myself Up at 8:04 AM 2 comments: