Its high time for me to climb back into the saddle and get back to researching new investments for my portfolio. I had originally ran this screen on May 5th but as my posting history can attest to, work was adding about 10 hours extra a week and taking up too much of my time and sanity. I wasn't able to properly focus on research.

Seeing as its been several months since my last screen, this time I just took the common fields.
Dividend Score: Yield, 5 year dividend growth rate, payout ratio
Fundamental Score: P/E, Graham Valuation, Tweed Factor (Yield+Div Growth Rate vs P/E).
You can really tell how high the market has been getting valuation wise as I am finding fewer and fewer companies getting a score of 5 or higher. 8 vs 32 from my last screen.

6 of the 18 companies I found dealt with insurance or were holding companies of insurance companies. In the past I skip over them because of my AFL position. I usually only get a couple so I'm thinking something has changed in the insurance landscape and will look closer at them this month...


Companies quick to cross off...
I have already removed all China based companies and Small Regional banks
WU: Negative EPS growth
CVX: Already own and am happy with COP
TGH: Too much debt heading into rising interest rates
COP: Already owned
AFL: Already owned.

New Companies for possible review...
MHLD: Maiden Holdings. A reinsurance company that has less cyclical EPS drops than most of the other ones I have seen. Still I am hesitant about it even with them hitting the highest score this month. They started in 2008 so don't have a long history for me to properly evaluate them on.

THG: The Hanover Insurance Group. A holding company of property and casualty insurance companies. Nothing in particular with them that jumps out at me and the price has been flat. I'd like to see a pullback as incentive to research them.

SDRL: Seadrill Ltd. An offshore oil and natural gas drilling company. They just started in 2010 and don't have much growth. That's something that my screen does not cover well, new companies. I have no way of knowing what kind of valuation the market will give a new company. I'll pass for now.

PMT: PennyMac Mortgage Investment Trust. PMT is a residential REIT that started after the housing bubble collapsed. I have no way of determining how management would have handled themselves during that time which is critical for me. I want management to be able to identify and avoid or mitigate problems.

HMN: Horace Mann Educators. An insurance holding company of Illinois and Texas insurers. Not terrible and if it weren't for AFSI I might have looked into this one. I'm mildly curious where the Educators part of the name comes from.

BIP: Brookefield Infrastructure Partners. A master limited partnership (MLP) energy transportation company. I do like the fact that they are not just a U.S. energy company, they also are in Australia, Europe, and Asia. What I don't like about them is they only have a 4.6% yield. MLP dividends are not qualified so you will pay the full tax on them. I'd prefer 7% or more for MLPs.

STWD: Starwood Property Trust. A REIT that owns subsidiaries that deal with commercial mortgage back securities. It dropped 20% on 1 day in February and never recovered telling me something fundamentally changed with them.

TAL: TAL International Group. A cargo container leasing company. Similar to Textainer but they appear to have even higher debt. A 6.5% yield is juicy but I think its high for a reason here.

PFG: Principal Financial Group. Another insurance company. Their share price closely follows their earnings which sadly only has a 3% growth rate. Their EPS collapsed in 2008 which I won't hold against them as everyone got hit. However it took 5 years to recover which is way too slow for me when others have done better.

DE: Deere and Company. Farming machinery. They originally appeared on my screens back in January and I never took a close look at them. I see that they are expecting -8% EPS growth for 2014. The market really hasn't given them a pullback on that news so I don't sense an urgent need to move on them.

BBL: BHP Billiton plc. The english side of the BHP partnership of this mining company. The EPS is really spiky and the share price follows it.  I don't care for how they only pay twice a year but most plcs will follow that.

LLL: L-3 Communications. Aerospace and defense company. They have had hardly any EPS growth for the past 4 years. The U.S. government isn't putting a lot of new money into their budget but LMT and NOC found a way to increase EPS. I want better management teams working for me than flat EPS.

This month's research screen winner is...
AFSI: Amtrust Financial Services Inc. AFSI is interesting for a couple reasons.
One is that they own a sizeable stake in MHLD, the highest scoring company on this month's screen so I can get exposure to it too. AFSI gets 25% of its premiums from MHLD.

Second, is that even though they have reinsurance exposure, they don't have the cyclical collapsing EPS problem like all the other ones I have seen have.

Third, a 55% dividend growth rate and 17% payout ratio tells us they are not afraid to throw money at investors and they can grow the company to match it, and they have plenty of room for more raises.

Lastly, they weathered 2008 and 2009 beautifully. 2008 gave them -8% EPS growth but then in 2009 they had +26%. This makes a lot of sense when we see that 45% of their insurance premiums comes from workman's compensation insurance. Companies are not going to cut back on that. The risk is too great. The fact that the U.S. had millions of jobs lost during that time and a workman's comp insurance company had large EPS growth tells me this is a management team I need to get working for me.

I did a full review of them and purchased half a position earlier this month. I'll be posting that review shortly. 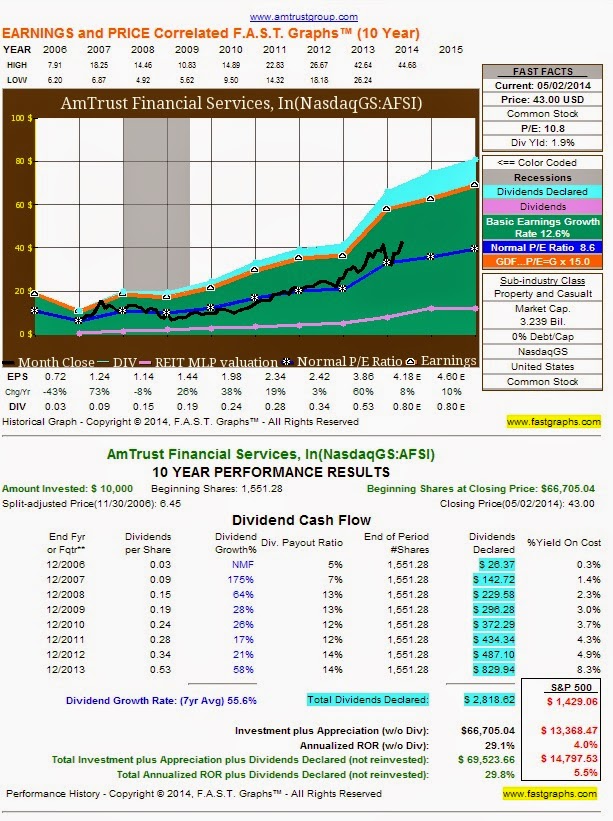 Disclaimer: The investments and trades discussed are not recommendations for others. I am not a financial planner, financial adviser, accountant, or tax adviser. The financial actions I talk about are for my own portfolio and money and only suited for my own risk tolerance, strategy, and ideas. Copying another person's financial moves can lead to large losses. Each person needs to do their due diligence in researching and planning their own actions in the financial markets.
Posted by Pulling Myself Up at 3:58 PM No comments:

Email ThisBlogThis!Share to TwitterShare to FacebookShare to Pinterest
Labels: Screen

My company has really stepped up recently in fixing my workload problem. Last month we hired 2 new employees and they are now getting up to speed. I have 2 more starting in June. With 10 less hours worked a week, I'm now able to focus more time back on whats important. Getting myself out of a paycheck income model.

I wouldn't have thought I would ever have invested in a pet store but this came up on my screen back in February. I've kept my eye on it and they just missed their last quarter estimates. I'm not seeing anything terrible and I really like their long term growth plans to combat against Amazon stepping into the pet arena with Wag.com

How do they make money: Petsmart sells pet supplies covering a range of needs. They also have in store services such as boarding and grooming.

Long term plans
1: Expanding our proprietary and exclusive products and services (36% of sales in Q1 2014)
2: Growing our most valuable customers
3: Connecting with pet parents in an authentic and personalized way

Risks
Brick and Mortar vs Amazon: Amazon has launched Wag.com to compete for pet needs.
Mitigation: Long term plans tackle this issue. They are also testing ordering online and picking up in a local store. 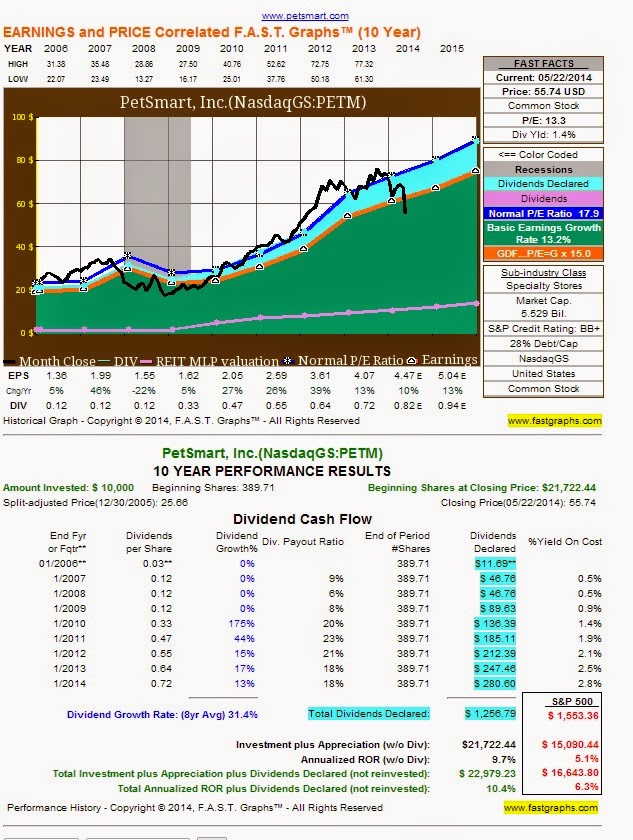 As always, Fastgraphs.com really tells the story of PETM quickly and easily. They took a hit to the price in January which is what got my attention. Now they are more undervalued historically that at any recent time. Of particular note is that not even the Financial Crisis of 2008 hit them this bad.


The only number that concerns me is the EPS drop in 2008 but we need to keep in mind what occurred at that time in the world and everyone took a hit. I won't count that one against management.


The yield is a concern but PETM makes up for it with a huge dividend growth rate. PETM averages over a 4% share buyback a year.


Company and Industry specific commonly used acronyms and terms
None


Disclaimer: The investments and trades discussed are not recommendations for others. I am not a financial planner, financial adviser, accountant, or tax adviser. The financial actions I talk about are for my own portfolio and money and only suited for my own risk tolerance, strategy, and ideas. Copying another person's financial moves can lead to large losses. Each person needs to do their due diligence in researching and planning their own actions in the financial markets.
Posted by Pulling Myself Up at 8:40 AM 2 comments: